In 2002, Adelante founder Virginia Smith’s septic system failed. She was told that between her small lot size, her proximity to the river, and the location of her drinking water well, she couldn’t meet any of the then-current setback requirements for siting a leach field on her property. When she asked what her options were, she was told she could either convert her septic tank into a holding tank and have it pumped every couple of weeks…or she could install an advanced treatment system. She met with the distributors of the four systems approved for use in New Mexico at that time, and her epiphany came when one of them said, casually, that the treated effluent was clean enough to use to irrigate her landscaping. She thought, “Why isn’t everyone in the arid Southwest doing this?”

Later, on a visit to her childhood home in New England, she traipsed through the backyard and a thicket to the pond on which she had fished on lazy summer afternoons. She was astonished. It was so choked with vegetation that it looked more like a meadow than a pond. Groundwater contamination from aged septic systems was the culprit. Thus began the journey to the design and development of an advanced wastewater treatment unit.

Virginia immediately tapped the engineering expertise of her Adelante colleagues Joe English and Jennifer Pope, and together they launched technical, economic, and legal assessments of the feasibility of designing a simple, reliable, and affordable residential wastewater treatment system that produced a discharge clean enough to be put to beneficial reuse. The results of all three assessments were favorable, and Adelante began the process of system design.

Adelante spent the next decade, and then some, on concept development and testing, and then on product development. Many prototypes and modifications were made along the way to create today’s Pugo Systems.

Put to the Test

Pugo Systems was installed in Comox, BC and underwent rigorous NSF/ANSI testing to gain NSF/ANSI 245 for Wastewater Treatment Systems – Nitrogen Reduction. The purpose of this Standard is to establish minimum materials, design and construction, and performance requirements for residential wastewater treatment systems providing for nitrogen reduction. 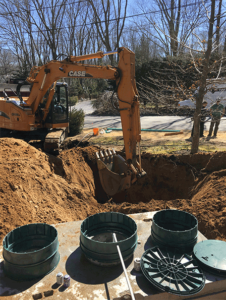 Coastal pollution from excessive nitrogen due to wastewater disposal on Long Island is contributing toward toxic algal blooms, oxygen-deprived waters, the loss of sea grass and wetlands, and the depletion of shellfish populations and fish kills. In an effort to address Suffolk County’s nitrogen pollution crisis, the county introduced the Reclaim Our Water initiative, a comprehensive plan to improve the region’s water quality by reducing nitrogen pollution through the implementation of advanced on-site wastewater treatment systems in targeted areas. Pugo Systems was selected to participate in the second phase of an I/A OWTS demonstration program.